A drovers’ road, drove or droveway is a route for driving livestock on foot from one place to another, such as to market or between summer and winter pasture. Many drovers’ roads were ancient routes, of unknown age, whilst others date back to medieval times and some are more recent.

Drovers’ roads are often wider than other roads, so that they could accommodate large herds or flocks. Packhorse ways were quite narrow as the horses moved in single file, whereas drove roads were at least 40 feet (12 m) wide, sometimes up to 90 feet (27 m) wide. In the United Kingdom, where many original drovers’ roads have been converted into single carriageway metalled roads, unusually wide verges often give an indication of the road’s origin. In Wales, the start of many droveways, drovers roads are often recognisable by being deeply set into the countryside, with high earth walls or hedges. The most characteristic feature of these roads is the occasional dog-leg turn in the road which provided cover for animals and men in severe rain or snow. 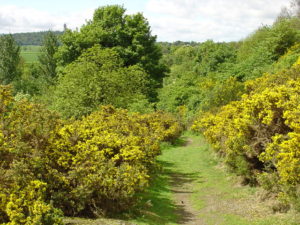 The people using such routes were called drovers. They accompanied their livestock either on foot or on horseback, travelling substantial distances. Rural England, Wales and Scotland are crossed by numerous drove roads that were used for this trade, many of which are now no more than tracks, and some lost altogether. The word “drover” is used for those engaged in long distance trade – distances which could cover much of the length of Britain or other world regions where droving was used – while “driver” was used for those taking cattle to local markets. Drovers used dogs to help control the stock, and these would sometimes be sent home alone after a drove, retracing their outward route and stopping at the same places; the drover would pay for their food in advance on the outward journey.

The task of controlling herds of three or four hundred animals on narrow droves, keeping them healthy, and feeding them en route over several weeks or months required expertise and authority.

Droving declined during the nineteenth century, through a combination of agricultural change, the introduction of railway transport from the 1840s onwards, cattle disease and more intensive use of the countryside through which the stock had passed for hundreds of years. For example, importation of cattle from Donaghadee in Ireland to Portpatrick, which would then be driven through Wigtownshire had reached 20,000 per year in 1812 fell to 1,080 in 1832, because they came by steamer direct to ports at Liverpool and Glasgow instead.

The last recorded large-scale cattle drove across Wales was in 1870, and of sheep in 1900, although it briefly revived during the rail strike of 1912. In Scotland, the last drove over the Corrieyairack Pass is believed to have taken place in 1906. Corrieyairack Pass had also been used by droves of cattle and sheep from the Isle of Skye; and the last drove from Skye to use the pass occurred in the closing years of the 19th century.

Here a beautiful song about a drovers road, by Mark Knopfler. Maybe the dog in the song even is an aussie.