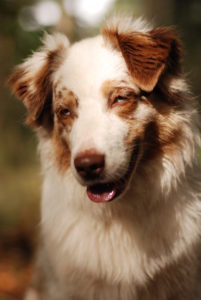 Blizz is my very first aussie. She is a very cheerful and open dog. She is too open for an aussie in my opinion. She greets everyone like she’s known them for years when she sees them for the first time. Blizz is always ready for action and when possible she comes everywhere with me.  She is a grand old lady by now and loves just to struen through the garden or play with a ball or stuffed toy.

Blizz learned me about herding and agility  which we both did with a lot of fun but also frustrations now and then. Especially in herding, this was because her instinct is less then the working breds . But she learned me a lot.

With Blizz I never bred. Because she has a lot white and mainly because she has epilepsy in her bloodlines. It’s a pity because I would have loved to have a pup form her. 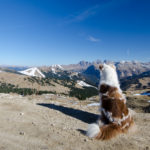 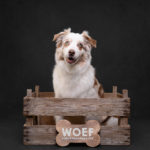 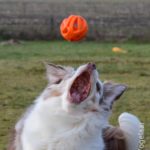 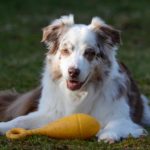 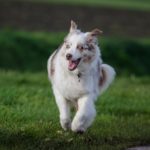 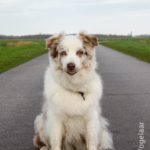 Blizz didn’t win a lot. We got most agility trials placements. But not super special. Although her first trial she won 1st in the regular. After just 10 lessons in agility. We made it to the second grade FCI in agility. In ASCA agility she almost got high in trial a few times but we just missed. She was a great dog to learn dog sports with.

She also won most promising newcomer on our first herding trail in may 2012. That was special for me.

Blizz also won a class in the farm trials open class when they just came to Europe, against some strong other aussies.